When days get shorter and the sun shows up less frequently than your willingness to work, and online galleries get filled with monochromatic drawings, you know that October has come. And along with it, Inktober, in which, oh my!, I finally decided to participate.

And it is the October influx of artistry that I want to touch upon. For those less familiar, Inktober (portmanteau of ink and October) is an annual challenge that consist in making daily drawings on topics from the list (most often the official one. Ale spotkać można też wiele alternatywnych). But you can find many alternative ones). To be faithful to the idea, you should draw using ink (traditionally with a nib, liner or a brushpen).

Previously, I have been only following the works of other artists. This year however, I said:

“Gimme a brushpen and hold my beer wine” ? 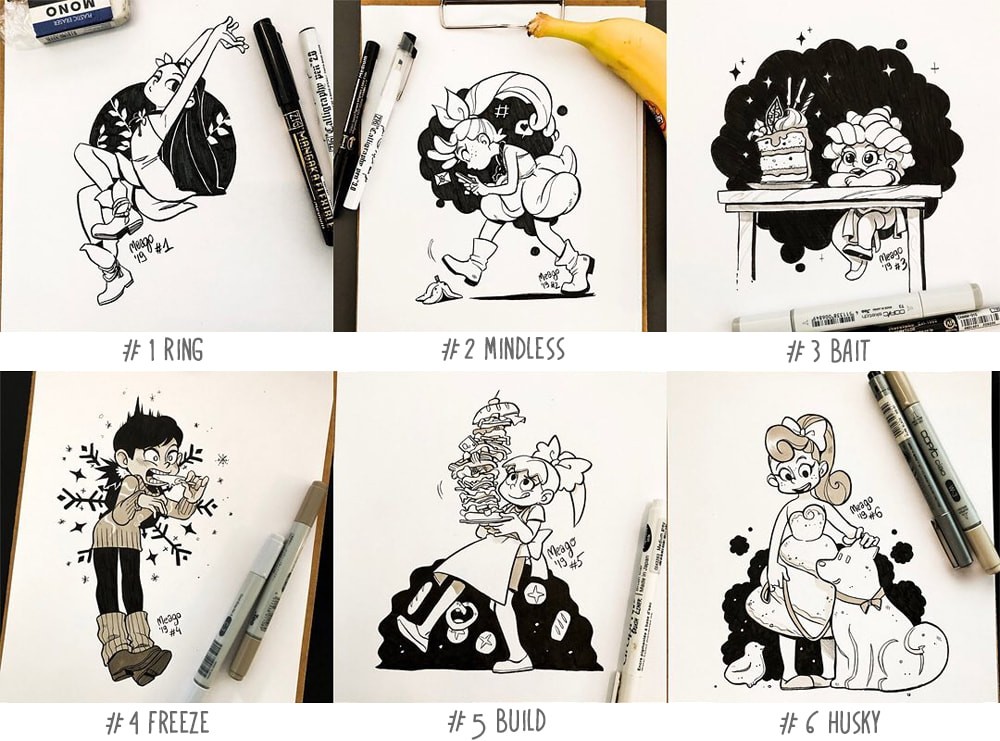 BUT WHY? I AM ALREADY SO BUSY

That I can’t deny. Working 8 hours in an office, two comics after hours, developing the Dollicious brand, individual commissions, how could I squeeze a challenge in there as well? You could just say that „you can’t” and that’s exactly what I would have said a year ago. So what’s changed? Because of the above reasons, I had to work out some kind of self-discipline. I learnt how to look at my daily schedule from a third person perspective, juggle tasks in a smart way (?), as well as talk to my brain so that it would stop sabotaging me and letting my slothful nature speak.

Therefore, Inktober was to confirm or deny the existence of my own, private organization. In short – it was a matter of honor. 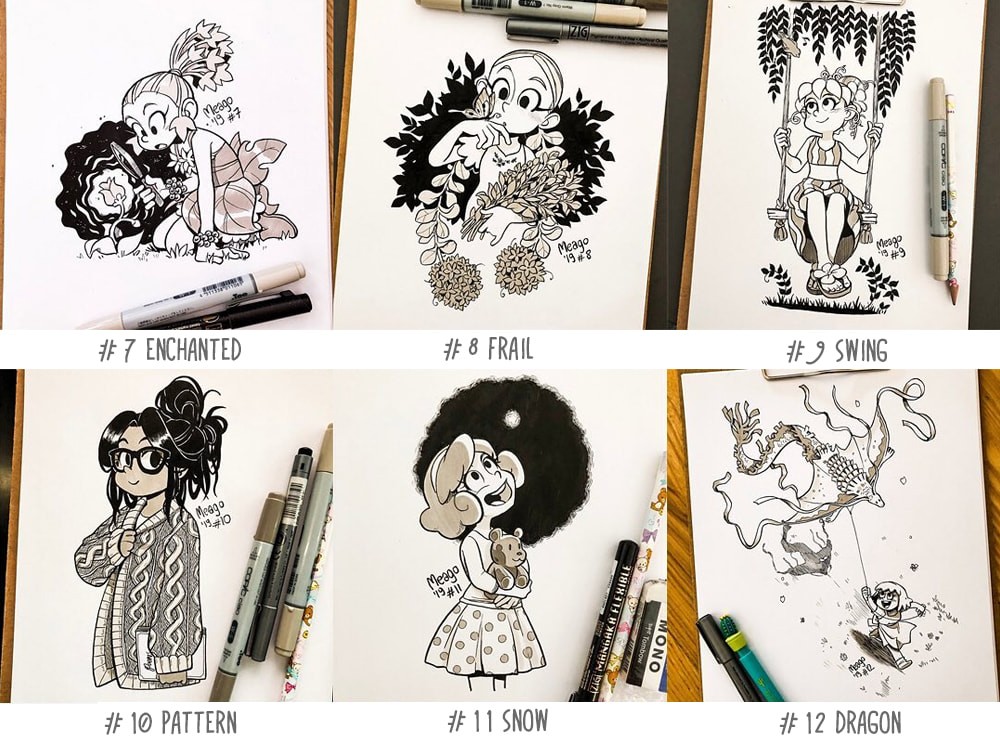 I LOOK BEFORE I LEAP

Of course I could aim for super-duper fancy drawings, but I’d end up with two, eh, three works tops. I know how much time I need for something complicated, I also know how long it takes me to draw something that looks good enough and that I ain’t ashamed of. So I went for 15-20 minute drawings that I was able to fit into different times of day.

So that’s how I got to draw – as warm-up after arriving to work, on the couch waiting for L. to get ready for work (I get up nearly an hour earlier and prepare first), before leaving the office when resting my eyes, while eating supper (though less frequently, as I prefer to eat than draw). There’s many possibilities, you just have to notice those moments and use them immediately. No unnecessary analyzing, no arguing with yourself. It went really okay, as I’d been doing that for over a year now. 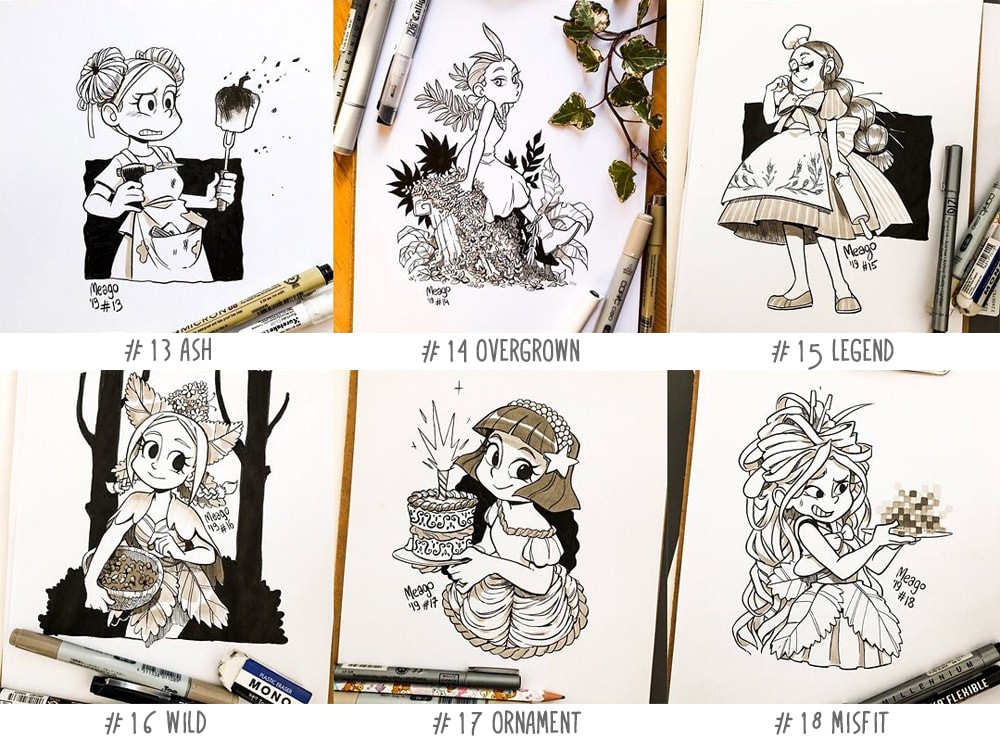 I KEEP EVERYTHING I NEED NEAR ME

This time, it’s a pencil case with drawing tools, a clipboard with a handful of paper sheets and a soft binder. Preparing your stuff for work each time can really break the rhythm. I kept everything together and carried it all in one bag. Preparing for drawing took me less than 15 seconds. 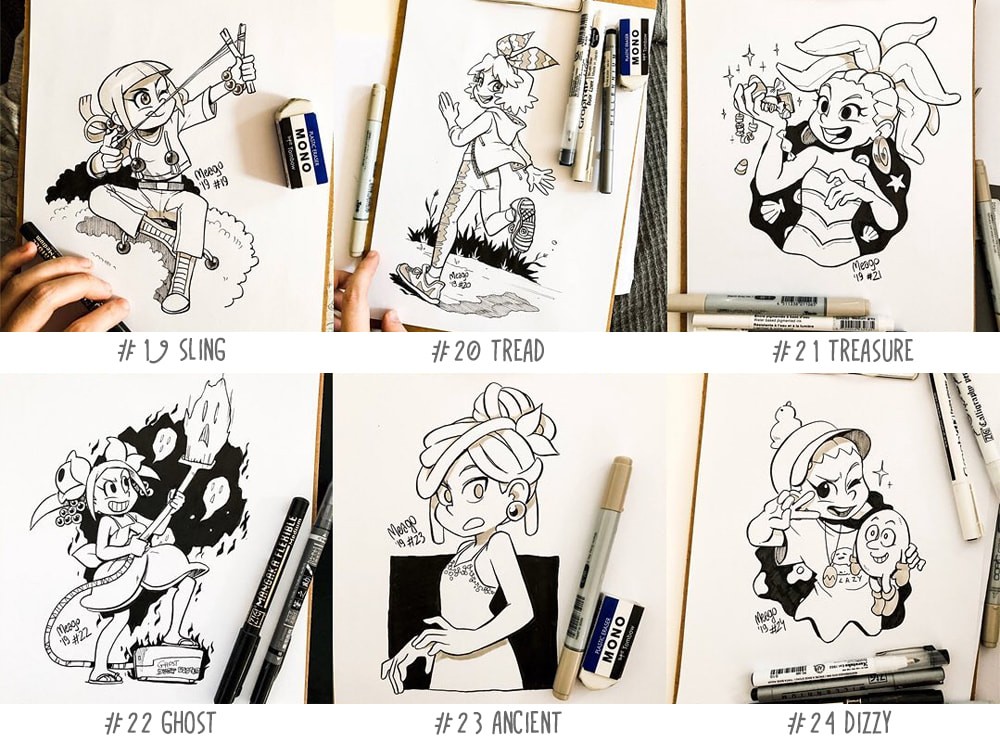 TOOLS – WHAT I USED AND WHAT I FOUND USEFUL?

I hadn’t been drawing traditionally for a long time, so I wasn’t used or attached to any particular tools. It’s a good thing that I played with brush lettering, so I found a few brushpens. I decided to give them a go even though I hadn’t got to draw with them much. I was however curious how they’d be. Inktober was a good excuse to test them more thoroughly.

So in the first place, I tried the ZIG Mangaka Flexible. Turned out I had three of those as I needed them for drawing during Comic Con. They were alright at first, but after a while, the non-precise quality of the nib and insufficient inflow of ink started to annoy me. I switched between all three (I didn’t mark how used up each of them was) until all three began to run out and piss me off. 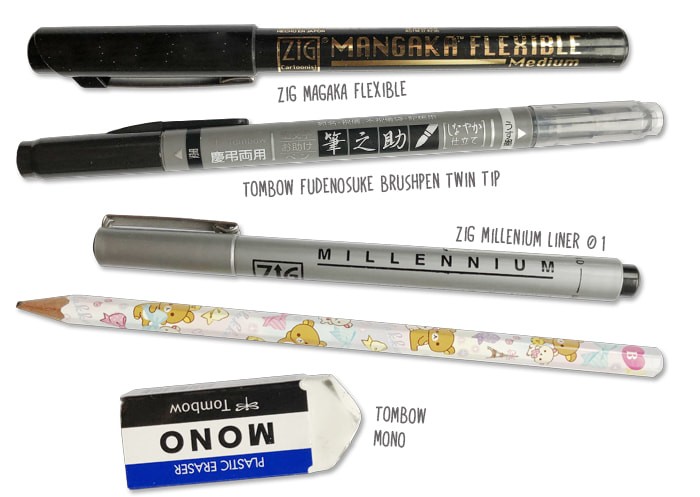 During the last days, I switched to a Tombow Fudenosuke Twin Tip, that turned out to be much, much pleasant in use, holding the line well no matter of the angle of my hand, easier to control details. I don’t know how quick it runs out because as I mentioned, I didn’t use it as often as the mangaka pen. Another advantage was the grey brush on the other side with which you can quickly switch to shading. 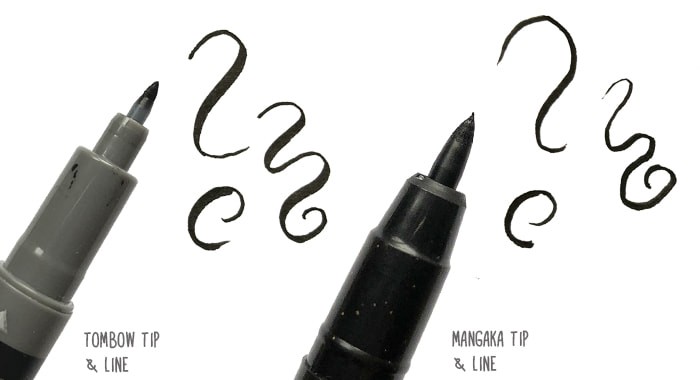 Speaking of shading, I used classic cell-shading with warm grays – Copic warm gray 1-5. Unfortunately, they didn’t make it to the end (I used them a lot before), so I complemented it with Toner Gray 3. The threes are my favorites – they’re intermediate, not too dark, not too fair.

I used a classic liner for details – in this case, ZIG Millenium 01. It’s not that it’s the best, I just found it in the pencil case and it was pretty fine. It turned out really alright, I suspect that just like Sakura Micron or UniPin. 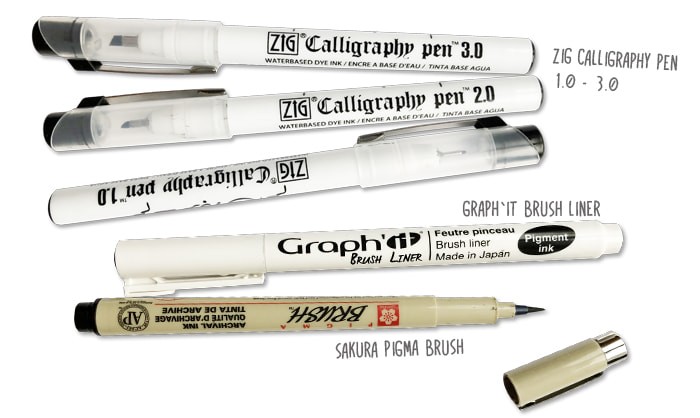 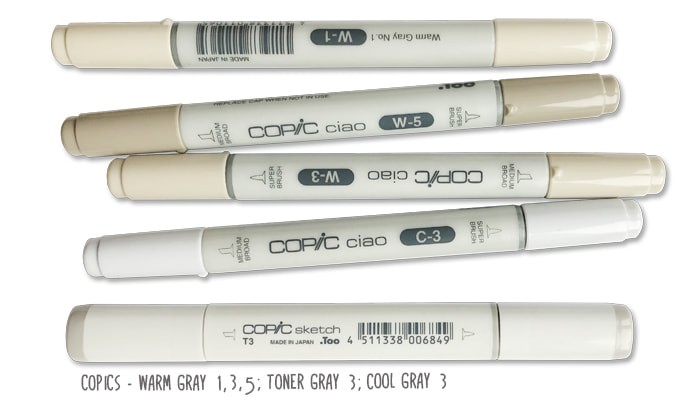 And that’s how day by day, topic by topic, I got into an inktober routine. November came quicker than I expected. I might go with Loish’s idea and mark it as #nopevember. I do have two comics to finish, after all. I proved what I wanted and I’m coming back to my beloved comic routine. 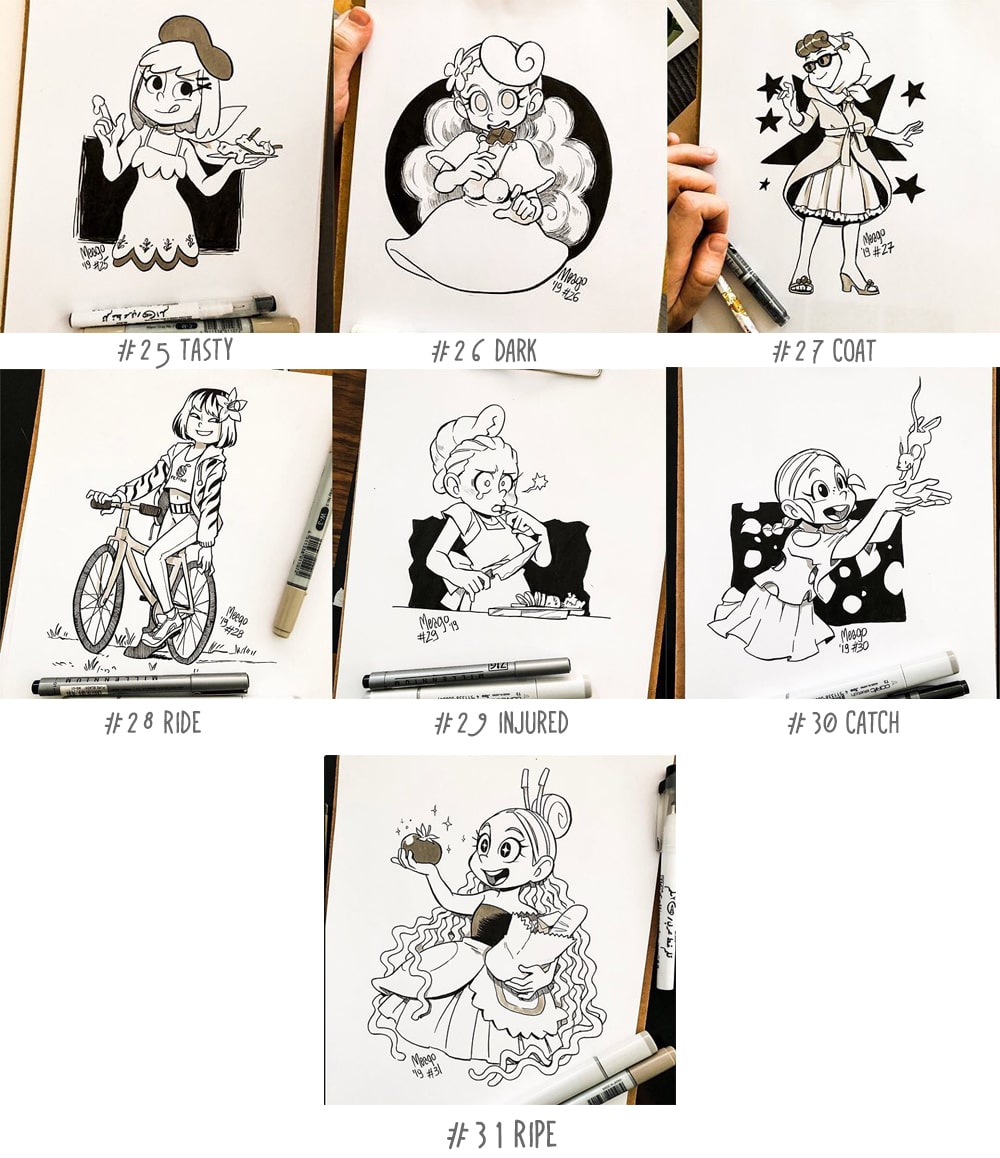 Don’t be afraid of masks! They make photoshop more beautiful